Birthmark Removal: Types of Birthmarks and How We Minimize Them

When we think about it, birthmarks are truly fascinating—they’re little anomalies that happen for no known reason, and many of them form before a baby has even been born. However interesting they are, though, it still doesn’t change the fact that many people find their birthmarks to be undesirable. The birthmark may be a unique part of their physiology, but it can lead to embarrassment and make the patient feel like their personality is being overshadowed by the distraction. Fortunately, significant progress has been made in birthmark removal by finding out exactly what birthmarks are and how they can be safely removed. 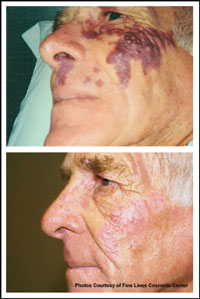 How are pigmented birthmarks removed?
At Laser Lights Cosmetic Laser Center, we utilize lasers that send short pulses of energy into the layers of the skin. This causes the pigments to break up microscopically so that the body can naturally absorb them. The exact course of treatment depends on the individual patient, as well as the color and size of the birthmark, but most patients require three or more treatments for complete removal.

Vascular Birthmarks
While vascular birthmarks often appear as a patch of skin that simply is a different color than the surrounding skin, their color variation is not caused by excess pigment. Instead, it is caused by blood vessels that have grown abnormally or excessively. This may sound dangerous, but these birthmarks are just as benign as pigmented ones. There are three primary types of vascular birthmarks:

How are vascular birthmarks removed?

While some vascular birthmarks disappear eventually, laser therapy is highly effective in vascular birthmark removal. A specialized laser is used to selectively clot and seal off the unwanted blood vessels, which are then absorbed by the body so they are no longer visible.

Although birthmarks generally do not carry physical risk, the effects on a person’s self-esteem (especially if the birthmark is significantly noticeable) can be challenging. Birthmark removal can be performed on nearly any skin type and on children and adults of nearly any age. To take the first step toward a birthmark removal treatment plan that is customized to you, simply schedule an appointment online so we can help you achieve a clearer complexion that lets your personality shine through.