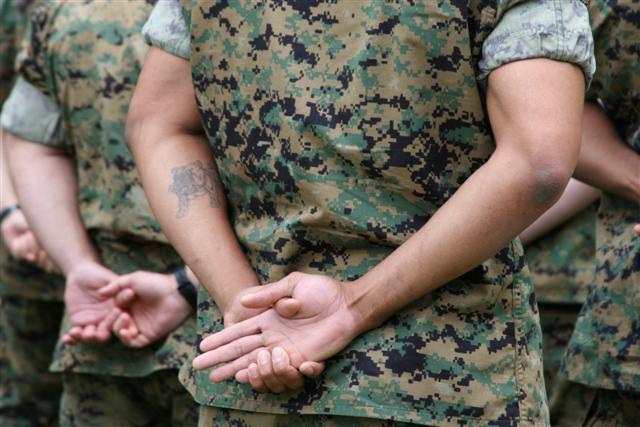 Summer is often a patriotic time in which we reflect on our appreciation for soldiers who have served and are still serving our country both at home and overseas. Many service members often show their pride in their branch of the military or memorialize fallen comrades through tattoos. Tattoos often provide soldiers permanent reminders of their service and celebratory tokens of their accomplishments. While tattoos may seem like a rite of passage for many in the armed forces, the military has strict tattoo regulations for current and incoming soldiers.

Members of the armed forces are commissioned to represent the United States with the utmost professionalism whether in times of peace or during combat and any tattoos that detract from the polished look in uniform are often not allowed. These include tattoos that are visible when in dress uniforms such as those on the hands, neck, and head. Each branch has its own specific rules, but most follow the same general guidelines.

Tattoos that are in any way obscene or discriminatory and those that demonstrate a membership in any group that advocates hatred are not allowed. The catch is that some extremist groups often sabotage innocent symbols like cartoon characters which means current or potential soldiers may not be aware of their tattoo’s alternate meanings.

The caprice of youth often gets the best of some individuals who rush to get their first tattoo as soon as they turn 18. Other times, the sway of love persuades some people to demonstrate their feelings through permanent ink. No matter the reason, some incoming and current soldiers choose to have their tattoos removed.

Laser Lights Cosmetic Laser Center offers an FDA approved laser tattoo removal system that is safe for all skin types. The laser emits pulses of light that penetrate the top layers of the skin and are absorbed by the tattoo pigment. The laser energy breaks the tattoo pigment into smaller fragments that the immune system can absorb and eliminate. Just like getting a tattoo can be uncomfortable, so can tattoo removal. Comparable to the feeling of being snapped with a rubber band, most removal sessions last less than or around 15 minutes.  Depending on the size, location, color, application method, and the amount of time the tattoo has been in place, multiple laser tattoo removal sessions are usually necessary for complete removal (sessions usually spaced 4-6 weeks apart).

Whether you’re entering the military and need a tattoo removed for professional reasons, or if you just regret a past inking, Laser Lights can provide you with the highest quality tattoo removal services. Contact us for a tattoo removal consultation with one of our certified laser technicians. Visit our website to learn more about the other services we offer, and be sure to connect with us on Facebook and Twitter if you haven’t already.

What Makes Laser Lights Level of Care So Unique for Our Patients?

What to Expect from Your Laser Tattoo Removal