Interesting Study about the Relationship between Tattoos & Deviant Behavior 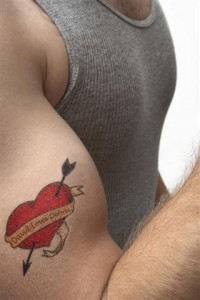 There has long been a stigma about tattoos and being “bad to the bone” – or in other words, there is a popular association between tattoos and deviant behavior. Considering this, a group at Texas Tech University conducted a decade long study to find a link between the two.

Their findings do suggest a link between body art and deviant behavior but only for those who have “inked up” or accessorized their bodies in extreme ways. The study not only asked about the number and size of tattoos on their body, but inquired about behaviors such as drug and alcohol use, sexual activity, and academic cheating.

Findings suggested that people with 1-2 tattoos or 1-3 piercings responded similarly to those with no tattoos or piercings, however there was a sharp increase in the level of deviant behavior in those who responded as having 4 or more tattoos and 7 or more piercings.

Says a quote from the research paper: “Results indicate that respondents with four or more tattoos, seven or more body piercings, or piercings located in their nipples or genitals, were substantially and significantly more likely to report regular marijuana use, occasional use of other drugs, and a history of being arrested for a crime. Less pronounced, but still significant in many cases, was an increased propensity for those with higher incidence of body art to cheat on college work, binge drink and report having had multiple sex partners over the course of their lifetime.”

The researchers also noted the fact that tattoos and multiple piercings have become much more mainstream in recent years.

Linked to deviant behavior or not, if you have a tattoo that you wish to have removed, Laser Lights offers laser tattoo removal for tattoos of all colors.  Contact us for more information or to schedule an appointment.

In The News, Uncategorized

How SculpSure® Differs from Other Non-Surgical Fat Reduction Treatments

How Can I Remove My Unwanted Birthmark?

How Long Before My Event Should I Get My Cosmetic Treatments?